A still and graceful peace

なつき先生, 書道のワークショップありがとうございました！Some things I learned at the brief workshop Natsuki did for us.

1. A very controlled style of calligraphy follows lots of strict rules, which is fairly self evident.

2. Artistic and fluid calligraphy isn’t just all fluid and artistic. It has all kinds of wonderful subtlety derived from dancing around and within all the strict rules.

3. Making a simple horizontal line is really really hard when you follow the rules.

4. Actually doing Japanese calligraphy (書道, shodo) gives one a world of appreciation for the level of skill required, and for the spontaneous natural beauty that can be drawn out of repetition and practice.

5. Shodo is very jazzy. Spontaneity in the moment that comes from hundreds of hours of practice.

6. I could stand there and watch a calligrapher for hours. Seriously. Natsuki showed us how different characters ask for different kinds of drawing. To demonstrate she first drew the character for “quiet,” (静）which was graceful and slow, then she drew the character for “motion,” (動), which was more forceful and fast. There is a picture of her drawing of “quiet” (静) down below. It was a quick toss off drawing for our workshop, but look at it! It’s amazing! What surprised me was how slow, controlled, deliberate, paced her movements were. It was…I don’t know what. Poetry? Dance? Mesmerizing is what it was. Instantly calming.

7. With all the bullshit going on in the world right now, the fact that a roomful of adults stood transfixed for even a few moments in this still and graceful peace while beauty unfolded before our very eyes…it just makes me hopeful. Can’t help it. It just does.

8. Number 7 isn’t misty eyed naiveté, our creative capacity really is hopeful. In 2011, the year of the Tohoku tsunami disaster, Natsuki was at UBC studying international relations. A friend from Japan texted saying “Your calligraphy is in the newspaper.” Her friend had recognized Natsuki’s calligraphy in a photo. After the 03/11 tsunami Natsuki’s family lost contact with her grandparents for a week. They finally found them at the gym where people from Onagawa in the Miyagi prefecture had escaped to. Not being able to do anything to help directly, Natsuki sent them her calligraphy. One word, hope (希望). Turns out it was her grandparents her friend saw in the newspaper photo. They were holding up Natsuki’s drawing of “hope”. Her grandparents, along with most of the town of Onagawa, lost absolutely everything. But this simple piece of paper, a creative act lovingly sent out of hope, gave hope. It actually brought smiles and a will to perservere among the devastation. Amazing. That sounds kind of cliché and nice, so it’s easy to skip over. Just stop to think about that for a second, a simple creative act generated hope, and from that hope came possibility. Tasai people are purveyors of possibility and as such we have more wealth to share than we may know. 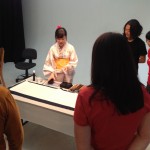 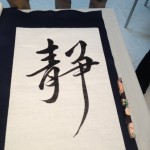 Ray’s dad was a Chinese calligrapher. A lot of similarities and a lot of differences. 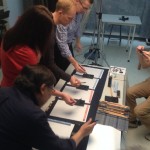 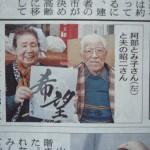